Another year of positive news from the U.S. economy, gains in the construction and housing markets, as well as historically low interest rates and falling unemployment, helped the U.S. ceramic tile market increase for the eighth year in a row.
In 2017 U.S. ceramic tile market surpassed the three billion sq. ft. level for the first time since 2006. Total consumption was 3.05 billion sq. ft. (283 million m2), up 5.1% from 2016 and the fourth highest total of all time.1
The following table shows U.S. tile shipments, imports, exports, and total consumption in thousands of sq. ft.

The chart below shows total U.S. consumption of ceramic tile (in sq. ft.) over the last several years. 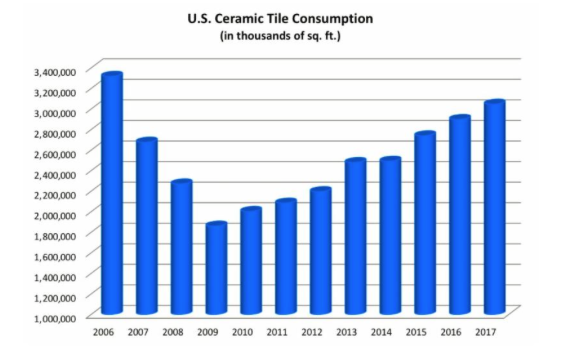 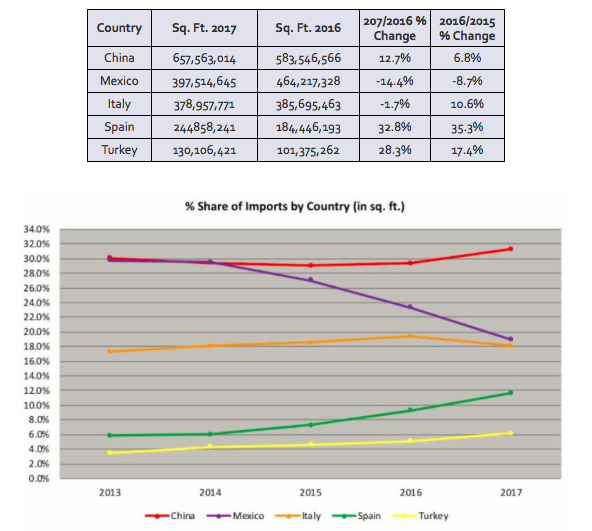 The average values of tile4 (including duty, freight, and insurance) from the five countries from which the most tiles were imported (based on sq. ft.) in 2017 were:

New home starts increased for the eighth year in a row, achieving their highest yearly level in a decade.
There were 1.20 million total housing units started in 2017, up 2.5% from the previous year.Despite the steady year-over-year growth since 2010, new home starts remain down by one third from 2006, the last full year prior to the start of the Great Recession.7

New single family home sales were at a 10-year high of 613,000 units, up 9.3% compared to 2016.Despite this positive news and six consecutive years of growth, new home sales have been slow to recover from the damage wrought by the recession.
For perspective new home sales are less than half of what they were in 2005, when a record 1.28 million new units were sold.8

Foreclosure filings, one of the main inverse indicators of the U.S. housing market’s health, have fallen dramatically from an all-time high of 2.87 million units in 2010 to 677,000 in 2017.
This was the seventh consecutive year-over-year decline and the lowest annual foreclosure total since 2005.9 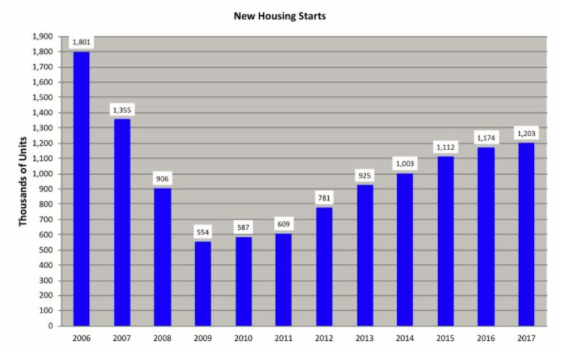 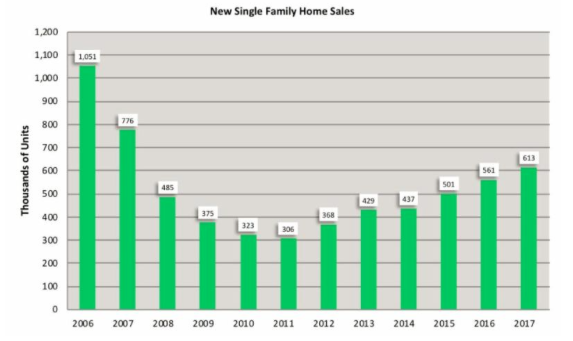