“The greatest joy of being a tile contractor is an easy one: seeing the smile on your customer’s face when you can bring the vision in their head to reality.” 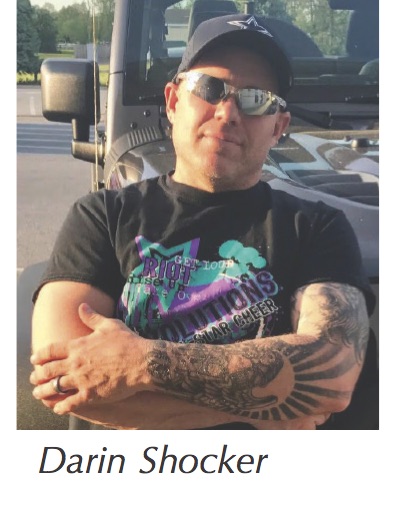 Darin Shocker, owner of Dutchess County Tile, who recently was recruited by a setting materials manufacturer as a New York-area rep for his integrity and knowledge, tells a fascinating story of his journey through the tile trade and his hope for the industry’s future.

Shocker started working for a local bathroom remodeler/tile setter when he was 16. Although, in Shocker’s words, his boss was a “hack and a crook; he took advantage of everyone he could,” and “even at 16, I could see how bad his work was,” Shocker discovered a love of ripping out bathrooms and being a helper!

Shocker worked with him through high school, and shunned scholarships to play sports in college because he had gotten what he considered a better opportunity: an offer to be “a tile setter apprentice for the biggest union company in NYC: Port Morris Tile and Terrazzo,” he said.

“I knew in my heart this is exactly what I wanted to do with my life,” he explained. “I wanted to learn the trade properly and then go start my own business, just like my old boss – only I wanted to give my customers a quality job and never take advantage of them.”

Shocker worked for Port Morris for eight years. This huge company with hundreds of employees gave him the chance to work on all types of projects from building exteriors, malls, lobbies, and swimming pools to luxurious hotels like The Essex House and the Ritz Carlton. 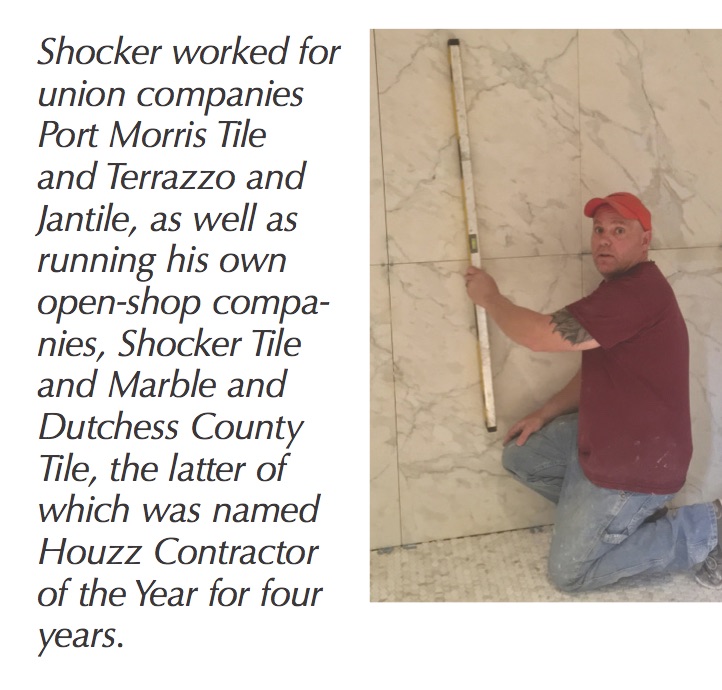 “The Port Morris family, Giacomo DeLazerro and Vincent DeLazerro, really took a liking to me and put me in every possible position to succeed,” Shocker said. “They put me with all their best foremen and set me up to go to the Local 52 apprentice school. I went through five years of schooling and working in the field before I was given my full tile setter’s union book. For the next three years I was a journeyman tile setter on various projects throughout Manhattan and became a foreman for the company.” And one important thing he learned along the way was that “the reward for good work was more work. ”

Moving from the union to breaking out on his own

About this time though, work started to get tight and he was out of a job. After three months, Shocker went out on his own looking for work – knocking on doors of new home builders and going into local tile stores with pictures of his projects. Soon, tile stores sought him out as a good, honest setter they could refer to customers.

“Then one day I got my first big break – a small contractor for whom I worked got hired by the folks who invented caller ID,” he said. “They bought an old IBM building in Valhalla, N.Y. for their headquarters. He hired me to do four lobbies, a ton of bathrooms and a big cafeteria. I couldn’t do this with the small crew I had, so I reached out to all my old foremen and good setters and finishers I had met in the union who were still out of work to give me a hand.” This job put his company Shocker Tile and Marble on the map, which had a great run and developed an excellent reputation for doing outstanding work.

Enter the recession in 2007, which decimated work all over the country. Shocker went back to his union roots and called Port Morris Tile and Terrazzo, and the new big guy on the block, Jantile, Inc. Owner Anthony Casola hired Shocker the day he called, and he worked there for four years until city work evaporated.

Ever resourceful, Shocker switched gears to take advantage of the wave of residential projects as his own company, Dutchess County Tile. His goal for his small company was to do high-end jobs, one at a time.

Then in 2014 – the first of four years his company was named Houzz Contractor of the Year (2014 – 2017), his 18-year old son DJ (Darin Jr.) Shocker decided that the school route was not for him and asked if he could come work for Darin. “I was happy and it rejuvenated me,” he said. “It gave me new energy.”

The elder Shocker said he  was “pretty much installing tile the same way over and over again because of past success. I wasn’t really keeping up with the newer methods. I wanted to teach my son the old-school ways but knew I better get myself educated with the new school ways so I could teach them to him as well.

“The very first thing I did was join the NTCA,” he said. “That was the best move I ever made. I would have turned into a one trick pony if it wasn’t for all the NTCA, which gave me all the tools I needed to make me an all-school tile setter – a great mixture of new and old proper standards of setting tile, which I have been passing down to my son in hopes he will carry on the family tradition of quality tile setting. Following the NTCA standards, he is doing great installing and grouting while being super respectful to the clients.”

Within the last year, the elder Shocker was recruited by a respected setting-materials company to be an area rep. “With over 30 years of setting tile and the body breaking down a bit, I feel this was a perfect change for me to continue in this great business of ours for years to come,” he said. “For this I am truly blessed. I will put the same passion into being a rep as when working for myself.” 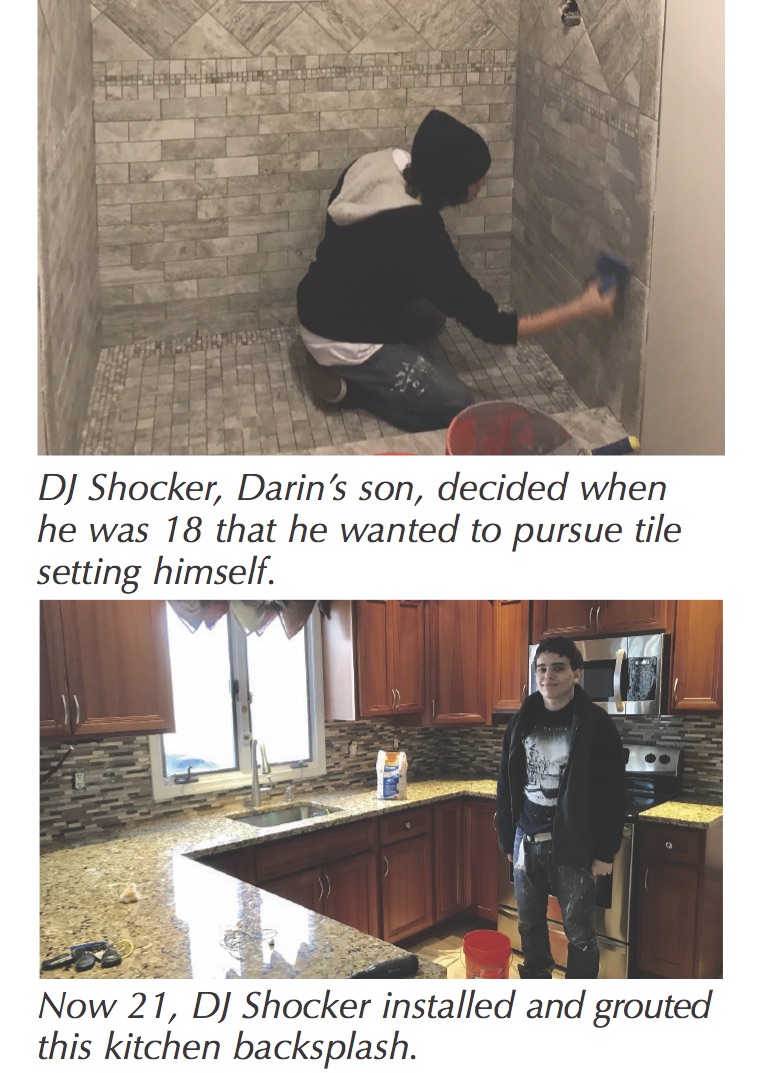 Shocker is confident his son will “keep learning and getting better and better,” with his guidance and experience. “He has a passion for this industry and will do just fine as long as he follows the path laid out for him. I’m hoping within the next couple years he will take his CTI [Certified Tile Installer exam]and pass. He will continue to learn and stay with all the new setting trends. He will be keeping up with the NTCA and attending workshops along the way.”

DJ plans to pursue both union training and CTI certification with plans to continue to run his own, residential business, after a stint as a union foreman. “I’m good with patience,” DJ said. “I like putting stuff together like puzzles and I like doing a job that someone will appreciate at the end. That’s a satisfying feeling. I will be doing this for a long time. I can’t see myself doing anything else.” 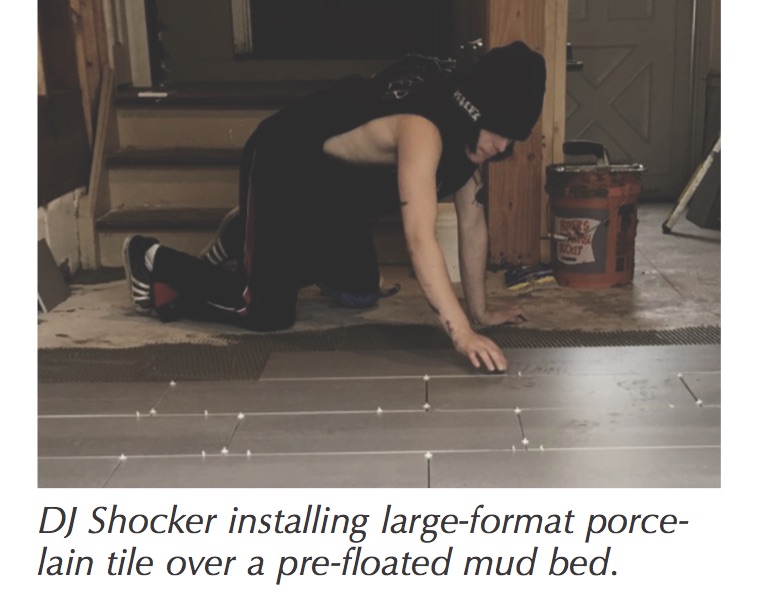 Shocker, Sr. is adamant that the industry has to start urging schools to bring back shop as part of the curriculum to garner interest and opportunity for youth. “I feel the kids that learn trades are going to be in high demand in the near future,” he said. “Most kids would rather take an easy job cold-calling than going through the hard work of learning a trade. If they could see into the future then maybe we could attract more youth into the tile trade.”

He advised anyone starting a business, “To do every job like it was for your mother’s or father’s house. Make it look great, but more importantly make it last. When you put your name on something you do, make it something you’re proud of. And last but not least, remember good work always leads to more work.”

Added DJ, “If you find a job you don’t mind waking up to do and enjoy it – and that’s the job to do!”