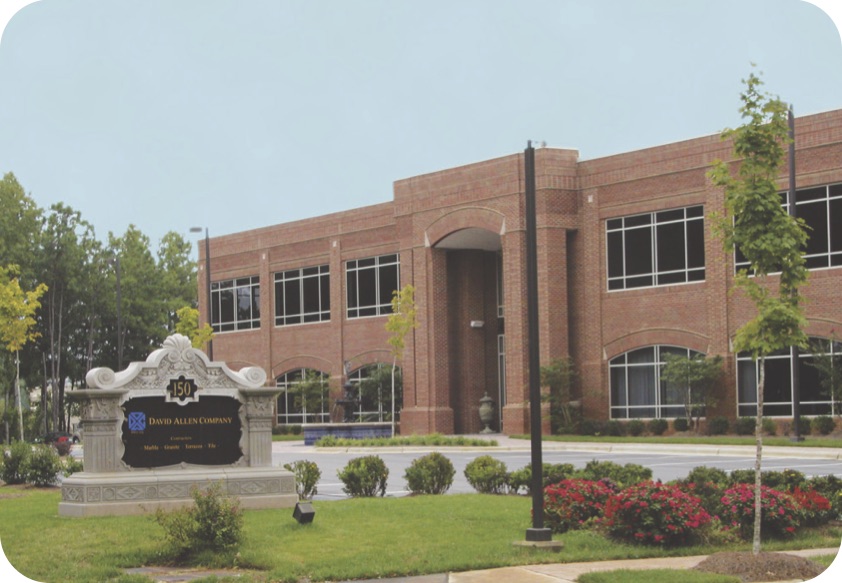 David G. Allen established his tile, marble, and terrazzo company in 1920. Allen, an exceptionally-skilled craftsman in the masonry arts, was often called on to perform the most difficult, challenging, and complex projects. His commitment to excellent quality and ethical business practices quickly drove his small company to become the preferred tile, marble, and terrazzo company in the region.

Robert Roberson, the current Chairman of the Board, began his career with David Allen in 1957, and purchased the company in 1967. Knowing the value of David Allen’s foundation of high standards and ethical business practices, Roberson and his leadership team remain committed to David Allen’s beginning principles, the result of which has placed the company as one of the largest and most-respected tile, marble and terrazzo companies in the nation, with offices in Raleigh, N.C., Washington, D.C., South Florida, Columbia, S.C., Birmingham, Ala., and Charlotte, N.C.

The company’s work – in airports, museums, hotels, hospitals, coliseums, schools and universities – has received more industry awards for workmanship and professionalism than any similar firm in the U.S. Today, David Allen Company continues its commitment to excellence as an ESOP (employee stock ownership plan) company, instilling pride and ownership at every level.

David Allen Company has a long standing history of supporting industry associations and affiliations. It is one of the few remaining charter members of the National Tile Contractors Association, joining what was then the Southern Tile Contractors Association in 1947. In fact, Robert Roberson is the only person in NTCA history to be named President of the association at two different times, serving in 1971-1973 and again in 1989-1991.

As the company celebrates its 100th anniversary in 2020 as a leading tile industry contractor, we caught up with Mr. Roberson in an exclusive TileLetter One-to-One interview.

What are the main factors that have allowed the David Allen Company to thrive as a leading tile installation contractor for 100 years?

Roberson: From the beginning, the high standards of integrity, professionalism, craftmanship, and customer service practiced by Mr. David Allen himself attracted loyal customers and talented employees.

During the first 10 years of my 63-year career with the company, I was able to witness how those values were truly lived out in Mr. Allen’s personal life as well as in his business life.

As we continued to be authentic in those areas, the company attracted talented leaders and craftsmen. Being a trusted, responsible resource is important to contractors, developers, architects, and owners. Being a trusted employer is certainly valued by team members and potential team members.

Beyond living our core values, I think several things have contributed to our successful longevity:

1. We are future-focused – to see both short- and long-term opportunities and risk.

2. We have attracted capable team members on all levels.

4. We believe being financially sound is a major asset. It eliminates stress so we can focus on opportunities. We have purposely been overcapitalized.

5. We demonstrate genuine concern for the welfare and success of all DAC team players, not just the owners and leadership.

What steps are the leaders of David Allen Company taking to ensure that they will continue to succeed both now and into the future?

Roberson: As it has so appropriately been said, “What got you HERE, won’t get you THERE!”

Aware that society and business, like everything in life, are constantly changing and evolving, we not only accommodate change – we advocate and capitalize on change. We respect and stay true to the core values while continuing to stay focused and prepared for the opportunities, challenges and changes that are coming tomorrow and next year. Our next generation of leadership is in place and being mentored for senior leadership. Forty-five percent of DAC (David Allen Company) ownership is ESOP owned – making everyone an owner.

Roberson: Beginning with David Allen himself as a charter member of NTCA, the company has actively participated in the associations that represent tile, marble, terrazzo, and the construction industry. We would never have achieved the level of success and professionalism that we enjoy today had it not been for our significant involvement with those associations. Much of our standing in the industry and certainly much of our knowledge resulted from our association involvement and from our interaction with association members.

To illustrate, DAC has provided four of NTCA’s presidents. I served as president on two occasions, Don Scott and Martin Howard are past presidents, and Chris Walker is the current president.

In 1985, I was appointed Chairman of what had been a three-person technical committee that had reported no activity for the previous three years. I immediately appointed 20 technically-knowledgeable industry members and scheduled quarterly meetings. We promptly started producing documents designed to guide the contractor through the maze of new and challenging installation methods and products. Those efforts resulted in the highly-popular NTCA Reference Manual. I served as Chairman of this committee for 13 years and was followed by Don Scott, who served for another six years. Martin Howard and Chris Walker are current members of that committee. Our team members, on all levels, have been and continue to be “association addicts.” Yes, we know the value of association involvement and recognize that we are largely who we are because of our association involvement.

Roberson: Change is often uncomfortable, but I believe change sustains. None of us wish to return to what we often call the “good old days” when we soaked glazed wall tile in galvanized tubs of water for hours before installing, applying a scratch coat, a leveling coat, and a bond coat, each with its own formula, and rushed to apply the tile before the mortar hardened – and considered installing 60-80 square feet a day as good production. Tile installations were very labor intense.

In those times, the required craft skill was much higher, and the technical skill was much less than today. If one claimed to be a journeyman tile setter with less than a four-year apprenticeship, he would be laughed off the job. There was a high sense of pride among the most gifted craftsmen. It wouldn’t be unusual to see a craftsman, as he finished his work, step back and observe his work, just as an artist may do in critiquing his painting.

Most commercial tile contractors purchased tile directly from the manufacturer since distributors didn’t exist in most areas. In the 1950s, it was not unusual for tile – especially trim pieces – to be shipped in barrels packed in sawdust.

For many of my earlier years, much of our installations were confined to toilets, bathrooms, and commercial kitchens. As a result of changing and improving installation methods, ever-increasing innovative tile designs and sizes, and effective marketing, we now often are the feature of many buildings. We have moved from the toilet to the lobby!

Communication with the job site usually required a visit since only a few of the larger jobs had phones on site. There was far more conversation about workmanship than about scheduling and production.

There were no copy machines, fax machines, computers, electronic devices, or Makita saws. The closest thing to an electronic device was a mechanical calculator with more than one hundred keys. The solution to most issues and problems back then was just “plain common sense.”

Share with us a few of your favorite or most challenging projects you were involved with during your illustrious career.

Roberson: In today’s construction arena, all large projects are very challenging with demanding schedules, short time frames, tight budgets, difficult coordination of trades, and accessible work areas. We master all of those challenges every day.

The project I enjoyed most was our own 25,000-square-foot office building. We were fortunate that it occurred when we didn’t have a time frame or a budget. I took the architect on a 10-day trip to Italy to be sure he understood what I was trying to accomplish. The contractor built the building in nine months, and it took me over a year and a half to do the finishes. From the day we started construction, the job site became my office. I enjoyed working alongside our artist, Vickie Wilson – creating mosaics and marble patterns, resourcing materials, and watching the building that I had built in my head come to life.

You have been leading the David Allen Company for many decades. What are you most proud of as you look back on the success of the company?

In 1969, Don Scott joined my one-person team in our tile operations. Don was an education major and had just finished his first year of teaching high school math. He had no previous experience in tile, marble, terrazzo, or business. His impressive character was obvious, and I thought he had tremendous potential. Then, in 1971, David Roberson joined our leadership team in our terrazzo operations. Like Don, David was fresh out of college but had no prior working experience. They were fast learners and hard workers, reinforcing everything that was valuable to our company’s success – a strong commitment to our core values, long hours, sacrifices, and 100% loyal and productive leaders. Don became the President and David is now the CEO.

For me, that was a turning point. Don and David liberated me. I began focusing more on vision and leadership. As things began to change, I was able to attract more very talented and committed people who enhanced our values.

Phil Halcomb joined the team in 1986 and established our highly-successful D.C. office. In 1992, Art Odom, a CPA, became our company CFO. Art is now the President of the company. Following Art, Martin Howard became an important part of our leadership team and is now Executive Vice President and a past president of NTCA. Martin oversees our tile and stone operations and our seven branches.

In 2010, Chris Walker joined the DAC team as Vice President, Northeast Region. Chris is the current president of NTCA, and many others along our 100-year journey have left their indelible and valuable mark.

But back to your question: What am I most proud of? It is not the most monumentally challenging job we ever successfully completed. Nor is it some artistically created masterpiece. Rather, it is the leadership and the team of quality, talented, and committed individuals who have made our company what it is today and who will continue to keep our company exceptional and relevant. It is the people who are David Allen Company – yes, that is what I am most proud of.

Leading tile industry consultants At the Total Solutions Plus Virtual Conference held towards the end of last year, I was honored to participate in a...
Read more
Content

As a leading trade association in the flooring industry, the National Tile Contractors Association is constantly looking for new programs and services to bring...
Read more
Content

As Publisher of TileLetter and Executive Director of the National Tile Contractors Association (NTCA), I have enjoyed interviewing a variety of guests from all...
Read more
One-to-One

For over 50 years United Tile, a leading distributor in the Pacific Northwest, has offered the most comprehensive and creative selection of tile stone...
Read more
One-to-One

Crossville Incorporated is a leading manufacturer of porcelain ceramic tile located in the heart of Tennessee. In recent years, it has expanded its operations...
Read more
- Advertisment -

Built by You, Backed by ARDEX™