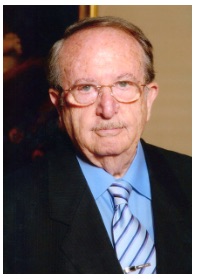 Miami, FL – March 2018 – ADEX’s 3rd generation leader, Mr. Francisco Garcia Felipeneri, known to friends and family as Paco, passed away on March 9, 2018 surrounded by his family. He took on the leadership and visionary position of 2 generations of family before him and saw the company enter its 121st year in the business. He was a man of heart which he poured into his family, company and industry.
Among his professional merits, Mr. Garcia was President of CEVISAMA, the International Fair for Ceramic Tiles, for 12 years. In 1993 he received the Medalla de Oro de la Villa de Onda for his contribution to the international promotion of the Spanish ceramic tile industry.
Under his direction, the company expanded from its European customer base to the North American market and established ADEX USA which now entered its 21st year. Paco was instrumental to the company and lead the introduction of “Art Tile” to the U.S. markets with its hand-painted tiles 35+ years ago. From that he went into what is now known as “subway tiles.” He often laughed as he said: “ADEX was in the subway tile market before there were subways.”
Under his direction, he groomed his children to take over the business and continue the family legacy of ADEX. This 4th generation continues his philosophy of listening to the customer and meeting their needs. Paco was also beginning the mentoring process of the 5th generation which has just entered the business.
His life and legacy is one which will live on through his children and their families as they fulfill the vision and dreams of the family business.
Thank you Paco…you will be dearly missed.
Email
Print
Facebook
Linkedin
Pinterest
Twitter
WhatsApp
Previous articleLandmark Ceramics presents Infinity limestone look porcelain
Next articleKeene Building Products Announces New Division Manager ofBuilding Envelope