An honor and a privilege 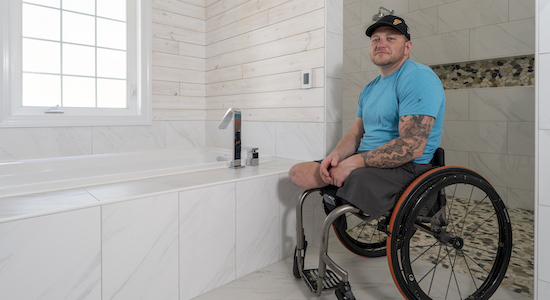 The first of the Marine Corps Values of Honor, Courage and Commitment is defined and observed by Marines as: “This [Honor] is the bedrock of our character. It is the quality that empowers Marines to exemplify the ultimate in ethical and moral behavior: to never lie, cheat, or steal; to abide by an uncompromising code of integrity; to respect human dignity; and to have respect and concern for each other. It represents the maturity, dedication, trust, and dependability that commit Marines to act responsibly, be accountable for their actions, fulfill their obligations, and hold others accountable for their actions.”

Why is this important? Because Staff Sergeant Brad Lang – the centerpiece of this story – served honorably as a Marine, and has inspired others to give back out of honor for his service.

Phil Woodruff, Schluter Systems VP of Distribution Sales US, met Lang two years ago at a NASCAR event in driver Corey LaJoie’s garage. The two struck up a friendship at subsequent events and when Woodruff learned that Lang was in the midst of correcting a bathroom renovation project, he saw it as a great opportunity to lend a well-deserved hand.

Lang enlisted in the United States Marine Corps in 2005 and was promoted to the rank of Staff Sergeant (SSgt). He started in the Infantry, but after his first deployment, applied to and became a member of the highly-selective Explosive Ordnance Disposal (EOD) team. This group is tasked with various duties, including locating, accessing, identifying, rendering safe, neutralizing, and disposing of explosive hazards. Simply put, it was about “bringing people home safely.” An accident in the line of duty in 2011 took SSgt Lang’s legs above the knees, necessitating multiple surgeries and nine months of rehabilitation at the Walter Reed National Military Medical Center.

A new home for SSgt Lang

In 2013, Lang and his family received a new home via the Homes for Our Troops nonprofit organization that builds and donates specially-adapted custom homes for severely-injured veterans across the country. Accessibility is one of, if not the most important design criteria for these homes. Ensuring accessibility and effective waterproofing in bathrooms and tiled showers can be especially challenging in this regard. Despite the best efforts made to provide the Langs with excellent results, the shower was lacking a true system approach and did not function as hoped in the long term.

After using the shower for some years, Lang had an idea to improve its functionality.  There was a bench across the back wall of the three-walled shower, but Lang realized that adding an extension along the side wall to create an L-shaped bench would allow him to transfer from his wheelchair to the bench without rolling into the shower itself. This would be easier for him currently and as he got older, while also allowing him to keep his chair dry. As Lang discussed options with Woodruff, he was also making some minor repairs to tiles adjacent to the shower. This was when he discovered problems below the tile surface and diligently documented issues related to design and execution.

The original plans specified a pan liner and clamping ring drain with a bonded waterproofing membrane on the shower walls and on the floor outside of the shower. The fundamental problem was that the two dissimilar waterproofing methods could not be effectively integrated to create a comprehensive moisture-management system. There were also some errors made in the execution of the project, including a lack of pre-slope within the recessed subfloor area and fastener penetrations through the pan liner on top of the bench.

Revamping the shower for accessibility and performance

As with any application that doesn’t fulfill its intended use, there are lessons to be learned, but the focus shifted to how the problems could be addressed. In this case, after reviewing the information Lang provided, Woodruff determined that the best way forward was to effectively replace all the tilework in the bathroom. He made arrangements to supply the appropriate Schluter Systems products and found ready-and-willing partners in both Jay Samber and Scott Robine of Daltile to donate the new tile. With that settled, eager volunteers like EJ White from Schluter Systems came forth to lend an expert hand, and all focus turned to the reinstallation method.

Bonded waterproofing membranes and integrated bonding flange drains greatly simplify curbless shower applications, compared to traditional waterproofing methods like pan liners and clamping ring drains. Once the slope to the drain is established, the membrane and tile are installed over the entire surface, minimizing the thickness of the assembly. Ideally, the floor will be recessed before installing a sloped mortar bed or prefabricated shower tray to allow an even transition at the door threshold. This seamless entry point would be critical to Lang’s independence and ease of accessibility. Various building codes and other sources, such as the Americans with Disabilities Act, include specific requirements for disabled access in public buildings and must be consulted when applicable. Areas of interest may include degree of slope, clearance, and supporting structures such as grab bars.

To prepare for the shower membrane installation, the original mortar bed was allowed to dry out and the clamping ring drain was converted to an integrated bonding flange drain using the Schluter®-KERDI-DRAIN adaptor kit. The Schluter®-KERDI-BOARD waterproof building panel was used to construct the L-shaped bench exactly as Lang envisioned and sealed to the shower system using waterproof banding. After the electric floor-warming cable was placed, all seams in the DITRA-HEAT membrane and the connection to the shower were sealed with the same banding. Once the waterproofing system was complete, the tile could be installed, and confidence was regained that the application would perform as required.

A lot of people came together to make this project possible, and there was a great commonality in why each person got involved. A recurring feeling was that it was an honor to help Lang and his family. In some small way it parallels the first USMC Value. Part of honor to the Marines is to “…fulfill their obligations…”. This group felt an obligation to support a man that made great sacrifice serving his country and the citizens of that country. Brad, it was a true honor. We thank you. 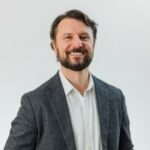 Director of Research and Development at Schluter Systems | + posts

Sean Gerolimatos is the director of research and development for Schluter Systems LP. He has been with the company since 2003. Gerolimatos has served as a member of the Tile Council of North America's Handbook Membrane Committee, the National Tile Contractors Association's Technical Committee and has written articles for numerous trade publications including TileLetter. Gerolimatos's academic background is in civil engineering. He has a bachelor's degree from Clarkson University and a masters from Cornell University.

ABC Convention 2023 is heading to Orlando