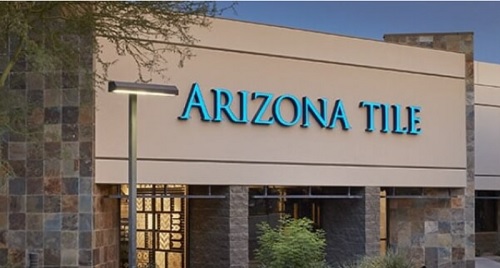 Arizona Tile is proud to share the contributions of Beth Gaughan who recently celebrated her 35th anniversary with the company. Beth is currently the Vice President of Sales and Marketing for Arizona Tile, but the significant impact she has had on Arizona Tile’s success during her tenure spans much further than that.

Not only has she been a key leader in the direction of the company, but the relationships she has developed with vendors and customers, and the mentoring she has provided to countless employees, are immeasurable. Her tenacity and level of professionalism, as well as her foresight about the market and evolving trends, have earned her the respect of all who know her. Never wanting to put herself in the spotlight, she always leads by example and attributes successes to a team effort.

Beth’s story at Arizona Tile began in 1987, but her relationship with the Huarte family began well before that. Co-founders of Arizona Tile Eileen and John Huarte lived in Kansas City, Missouri, during John’s years playing for the Kansas City Chiefs. This is where the Gaughan and Huarte families were originally introduced. A few of the Gaughan siblings, including Beth, even baby-sat the Huarte children from time-to-time, and their friendship continued after the Huartes left Kansas City.

Both during and after her time as a student at the University of Missouri, Beth’s work ethic was immediately clear. She worked as both a UPS driver and ran a country club pro shop, always willing to give of her time and energy to work hard and succeed. With Arizona Tile having been in business for over 45 years, it is evident that Beth’s drive and tenacity have played a key role in the company’s success. Always willing to give 100%, she was never one to shy away from a challenging position.

In 1987, Eileen Huarte hired Beth in her first role at Arizona Tile as a Showroom Consultant. She went on to serve in various roles including Outside Sales Representative and Sales Manager. Beth was appointed Vice President of Sales in September 2003 and then Vice President of Sales and Marketing in January 2019. In her current role, she leads the implementation of sales strategies in the field and showrooms including the management of Regional Sales Managers. She oversees the development of new showrooms, the remodeling of existing showrooms, and is part of the Product Design Team for all products.

Beth has guided the development and promotion of the National Builder Programs and is responsible for maintaining positive customer relations, including overseeing customer service training for Customer Service Representatives and Sales staff. Beth also works with, and oversees, the Marketing Team in the development of sales tools for showrooms and outside sales teams, as well as all marketing and digital initiatives. Beth has always been a leader in setting the culture at Arizona Tile and is one of the primary reasons the company has long-standing relationships with vendors and customers alike.

When asked about her impact, co-founder John Huarte remarked, “Beth’s role in the success of Arizona Tile cannot be understated. Her ability to build relationships with customers, have great foresight in regard to trends in the industry, and be a strong leader as part of the Executive Team, driving many strategic initiatives, has been invaluable. She is a key part of our success.”

About Arizona Tile
Founded in 1977 in San Diego, California, Arizona Tile has grown into a nationally recognized commercial and residential distributor in 10 Western states. Arizona Tile distributes more than 300 varieties of granite, marble, quartzite, limestone and travertine slabs and tile, over 60 colors of Della Terra® Quartz, and over 60 series of porcelain, ceramic and glass tile. Founded by John Huarte, former NFL player and Heisman Trophy winner, the company is still family-owned after more than 45 years.