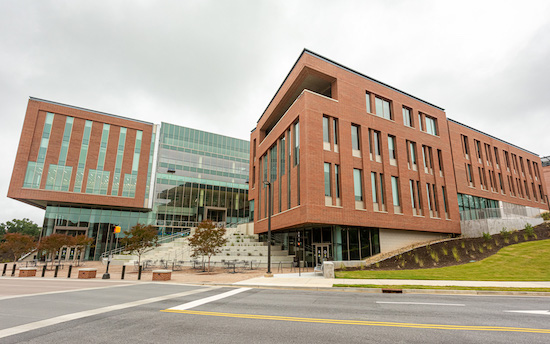 Installing products at one of America’s top universities requires smart scheduling, and not only because of working around class schedules. In the case of the crew members working at the Wilbur O. and Ann Powers College of Business at Clemson University, they were playing catchup after a three-week weather-related lag. It would take MAPEI products as consistent and dependable as the highly-ranked Clemson Tigers football team’s running game to turn this job into a win.

In fact, in addition to its 25 conference titles, the Tigers have made five playoff appearances and hold three national titles. And though Clemson University’s academic program is often overshadowed by its strong athletic program, academically, Clemson consistently ranks among the top 20 universities in America.

Not only that, Clemson University is near and dear to the ceramic tile industry, located less than 10 miles away from the Ceramic Tile Education Foundation (CTEF) and the Tile Council of North America (TCNA), headquartered in Pendleton and Anderson, S.C., respectively.

Designed by LMN Architects, the Wilbur O. and Ann Powers College of Business building itself is already architecturally significant. A modern red-brick and glass echo of the traditional red-brick buildings found elsewhere on campus, the College of Business building sits atop the highest point on campus and points the way to the future based on the solid traditions of the past. But when the construction job for the building started, that future was mired in the past – three weeks in the past, to be exact.

“The build was behind because of problems caused by the weather from three weeks prior when they tried to get the concrete poured,” explained MAPEI sales representative Brian Levering, who assisted with the project. This meant that the very tight construction schedule was suddenly tighter. Classes were scheduled to begin, but concrete’s cure time is, well, pretty much set in concrete – 28 days on average. This project was starting just as the concrete was finishing its cure.

Fast-track solutions for setting resilient floor coverings as well as stone and tile, were needed right away. The general contractor on the project, DPR Construction, and the flooring contractor, Harris Commercial, reached out to MAPEI for those solutions. “MAPEI is a third-generation successful family-run business, and Scott Junkins is the fifth-generation president of Harris, a successful family-run business here in Anderson,” said Mike Glass, MAPEI’s sales representative who works in tandem with Levering. “They know the importance of teamwork, innovation, and durability – which is why they work with MAPEI – especially when the clock is ticking, and the specs call for what amounts to a Hail Mary pass.”

MAPEI products on the jobsite

Levering describes arriving to the jobsite with the clock counting down — even before the job began. “When it was the flooring contractor’s time to be onsite, the job needed their help to push everyone else to get finished and get out of those areas,” he said. And those areas covered a lot of territory.

Executing plays worthy of the Clemson Tigers, multiple crews of four to five workers from Harris set out on each of the building’s five floors to tackle the project. “The crews worked simultaneously,” Levering said. “They had to because we were behind before we even started.”

Charlie Kernaghan, the project manager from Harris, concurs. “There was different tile throughout the building. We set Shades by Crossville in ‘Thunder’ and ‘Mist’ in the restrooms, and we set Unity Tile from Daltile in Ash Gray in the hallways. This is mosaic, and it was the largest tile order. We installed about 8,000 sq. ft. of just that mosaic.”

Crew members used Ultraflex LHT polymer-enriched, non-sag, non-slump tile mortar for the wall and floor tiles. Then, depending upon the location, they used either Ultracolor Plus FA, a fast-setting, polymer-modified, color-consistent, efflorescent-free grout, or MAPEI Flexcolor CQ, a ready-to-use, efflorescent-free, crack, stain, and shrinkage-resistant grout with color-coated-quartz to ensure color consistency. “The architect specified which grout was to be used where,” says Kernaghan. “Flexcolor CQ was used on the floors and in the one shower in the Dean’s office. Ultracolor Plus FA was used on all the walls.”

Trained crews and stellar products for the win

The schedule became even more compact when the job, which began in January 2020, was impacted by COVID-19 in March. “The completion date was set in stone for the end of May 2020. And then the pandemic hit,” Glass said when describing the tense scene.

Fortunately, a well-trained crew and excellent products provided a needed winning run. Because the construction industry was deemed “essential” in America, it did not shut down during the pandemic; this meant that jobsites could continue to operate if they observed CDC-approved safety precautions. So, the Harris crew members added CDC-approved safety gear on top of their regular personal protective equipment (PPE) and had to pause for temperature checks throughout the day. “We also maintained social distancing,” Levering said.

By the end of May, the last trowel was used and the last tile – be it carpet or mosaic – was in place. The Wilbur O. and Ann Powers College of Business is open for business and ready to climb in the rankings, thanks to a touchdown play by the crews from Harris Commercial and MAPEI.