We found the stress cracks in the floor several days after the tile was installed. I had never seen anything like this in my 40 years of being in the trade, and neither had my tile man. They showed up as slightly wavy white lines in the marble. There was not a black line or crack you feel.

We took up all the tile and cement board. We checked the subfloor with a laser to see if the floor was showing any signs movement. The entire floor was within 1/8” of level everywhere we checked. There were no ridges in the plywood where the sheets butted together. The only suspicious thing I found was an area along the 8’ side of the plywood where the tongue of one sheet was not fully engaged in the groove of the other. This meant that there could be more flex in the plywood than there should have been.

We removed the sheet of plywood and checked the framing. The new joists we sistered onto the existing joists were 2” x 8”. They were nailed soundly to the existing 2”x 10” that were all over 2” thick. These joists spanned from the living room wall to the exterior wall. They also pass over the wood columns and beams that divide the stair well from the entry hall. The floor platform was really strong and robust. The plywood had been installed with construction adhesive and ring shank nails. It was fully bonded to the framing and very difficult to remove.

We could not see any good reason why the tile came to show the stress cracks. The only reason that I could come up may have had to with using adhesive to bond the plywood to the framing. I have seen problems in other areas due to adhesive shrinking as it dries. We have found when wall board is installed with adhesive and screws that the screws and plaster above them can show up as little humps on the surface of the board as the adhesive dries and pulls the wall board closer to the framing. It is only a fraction of an inch but I have seen this happen many times before – as the board moves closer to stud and the screw stays fixed, you get a hump.

This is only a theory but if the plywood got pulled tighter to the framing as the glue dried, could that small shift in the floor sub floor cause the crack in the tile? Total guess.

Also the non-fully-engaged tongue could have had something to do with it on the long side. Though short side of the ply was firmly seated on a joist, and we had stress crack here, too.

Marble is much softer than other stones or porcelain tile. Like I said before, I have never seen this happen before and we have used this type of assembly successfully for many years.

Anyway, we decided to add rows of blocking between the joists along the 8′ length to make sure that side of the plywood was more secure. We re-installed the plywood and were planning on using uncoupling membrane under the tile to avoid further stress cracks in the marble.

I suggested to the client that he might like another type of floor material to avoid any other chance of this happening again due to the softness of the marble. I understand everyone’s reluctance to do this, but I just wanted to increase our chances of having no further complications.

The tile installer feels pretty confident the uncoupling membrane will do the trick. My stone guy examined our tile and he said the product was as sound as you are going to get with Carrara marble.

What do you think?

Good to hear from you. As you are aware, the NTCA always encourages people to follow industry guidelines set by both the Tile Council of North America (TCNA), and American National Standards Institute (ANSI).

I was able to read the correspondence about this stone tile failure. The questions raised are covered in our industry standards.

The assembly that failed was a backer board installation over plywood. Attached is the diagram from the TCNA Handbook method F250, which is the closest method to what was described. If you notice two layers of plywood are required underneath the backer board install. For a similar installation using ceramic only one layer of plywood would be required. That detail is found in method F144 on page 162 of the 2017 TCNA Handbook. 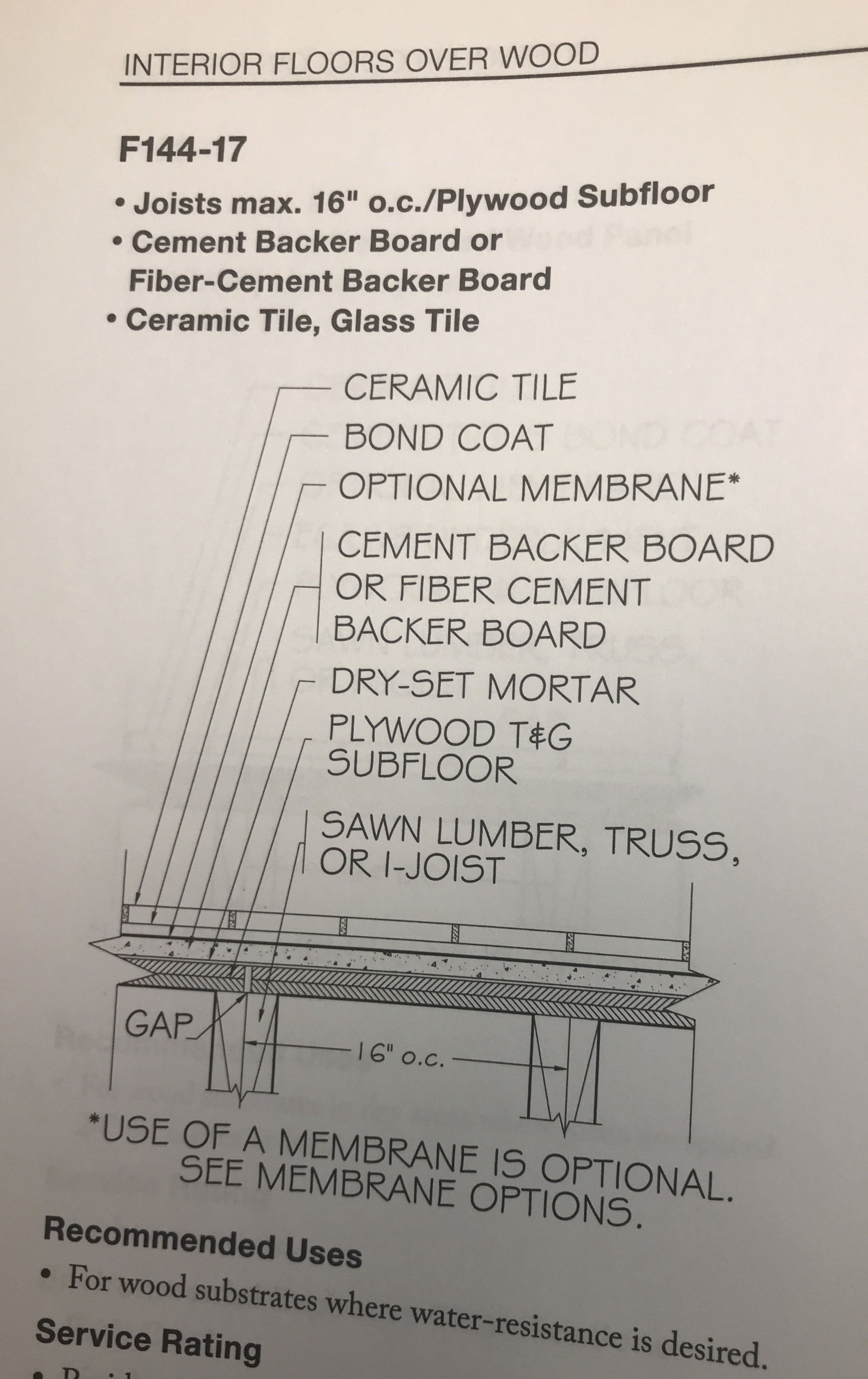 The question about adhesive under the plywood against the floor joist is addressed in ANSI A108.11 it states “…a 1/4” bead of construction adhesive should be applied to the center of the top of the joist and the plywood fastened to joist with 6d ring shank nails. There should be a 1/8” gap between the subfloor sheets.”

I hope this information helps.

NTCA lends a hand to consumers