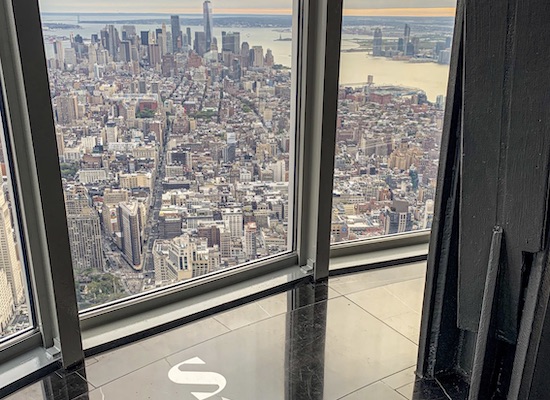 The sleek art deco silhouette of the Empire State Building is unmistakable in New York City’s internationally-recognized skyline. At the time of its completion in 1931, the Empire State Building was the world’s tallest skyscraper, reaching 102 stories and 1,454 feet (443m), which includes the spire and the antenna. Among the building’s most striking features are the observatories on the 86th and 102nd floors. It is from the 102nd floor that visitors have access to a newly-renovated, floor-to-ceiling observation deck that provides a 360-degree view of Manhattan, New Jersey, Connecticut, Massachusetts and beyond. MAPEI’s waterproofing products, grouts, mortars and sealant helped complete the deck renovation.

New York City’s Empire State Building attracts more than 4 million visitors a year. It is currently the 4th tallest building in New York City, the 6th tallest in the United States and the 43rd tallest in the world. However, it may well be one of the most, if not the most, famous building in the world. Featured in movies, books, songs – the skyscraper has become emblematic of New York City – joining the Statue of Liberty and a “Big Apple” as an instant identifier of place. And, it is no wonder, because from the building’s 102nd-floor observation deck, the city spreads out below in a vast scene of bustle and opportunity. It is a breathtaking panorama unlike any other.

To reach this topmost deck, visitors journey to the top by way of custom-made, state-of-the-art glass elevators with stops along the way. Each distinctive stop features lobbies full of immersive and historic experiences, including a museum gallery documenting the history of the building and its use in films such as “King Kong,” “Sleepless in Seattle,” “Spiderman,” and many others. You travel through time and history as you travel upwards. Millions of visitors have been drawn to the Empire State Building through the years. And, all of those guests had taken a toll. A bit world-weary and worn, owner Empire State Realty Trust decided the icon needed a refresher.

MAPEI on the job

Because the observation deck is a high-traffic area, a suitable tile and stone installation was specified to provide a durable, long-lasting floor. And the durability conferred by the 25-year warranty on setting materials offered by MAPEI was a huge plus.

Some preparation was needed before the tile could be installed. “The circular floor plate was extended by 6″ and MAPEI Novoplan 2 Plus self-leveler was used to level the existing floor plate,” said Darin Shocker, MAPEI Coordinator for the project. “The floor plate was surveyed by Navillus Contracting and the compass design was drawn in AutoCAD® by Navillus Drafting Department to fit exactly onto the floor plate,” he added. “This CAD file was used by Hakatai to waterjet the tile mural. Each piece was cut like a puzzle; each piece was labeled individually and a setting drawing identifying each piece was used to install the mural.”

MAPEI’s Modified Mortar Bedwas chosen for its exceptional bond strength as well as for the fact that it is pre-blended, which meant no jobsite blending of powders or any additional additives to worry about mixing. Ultraflex LFTmortar was used for the large-and-heavy-tile installation.

To grout the intricate Art Deco compass-design tile, Ultracolor Plus FAwas used for its rapid-setting ability and the added benefit of color consistency, stain resistance and non-shrinking characteristics. Mapesil T100%-silicone sealant was then used to complete the flooring installation.

For several months, crews worked in a suspended “cocoon” – a circular scaffolding structure – in order to complete the work without impacting guests visiting the 86th-floor observation deck. That’s right. Although the very top of the building was closed, visitors were still able to look out at the world-famous view – just from a slightly lower vantage point. After all, this is New York City, the “City That Never Sleeps,” and there is no sleeping on this view.

The 102nd-floor renovation, however, is now completed. The observation deck is open to the public, and safety measures are in place due to COVID-19 restrictions. MAPEI is proud to have been a part of this project at one of the world’s most renowned and distinguished buildings. The next time you visit the Empire State Building, don’t forget to look down at the floor while you are looking out. We happen to think that both views are pretty spectacular.