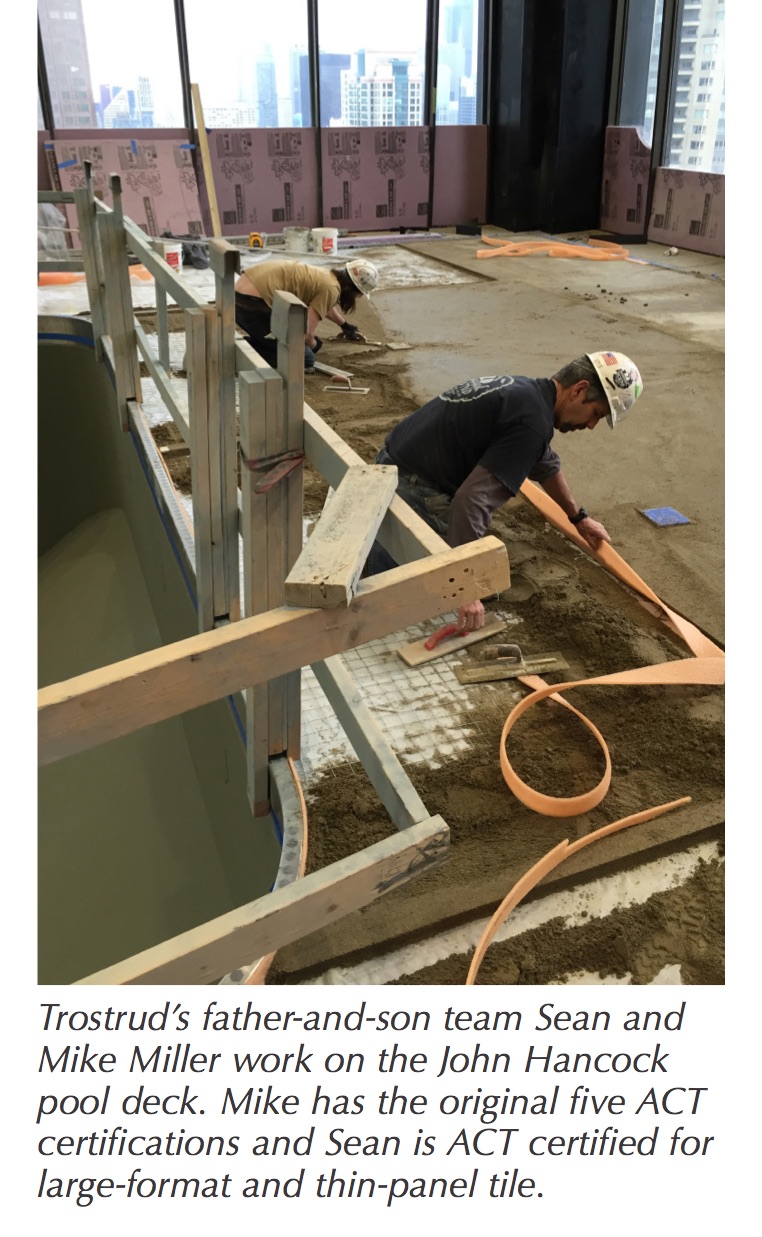 Chicago’s iconic John Hancock building was put into service early in 1970, but 46 years later, one of the world’s highest indoor swimming pools drastically needed an update. Archimage Architects, Ltd. was awarded the project of a full remodel on the existing health club, including the pool and locker rooms. The space was gutted down to original concrete substrates, but until the demolition was complete, no one knew for sure what they’d find.

Clune Construction, the general contractor, awarded the tile contract to Trostrud Mosaic & Tile Co., Inc., early in the bidding process, due to the 10-week lead time needed for procuring the Italian porcelain tiles. This proved to be a fortuitous decision due to the on-the-job meetings with architects Kirk and Sheryl Stevens. 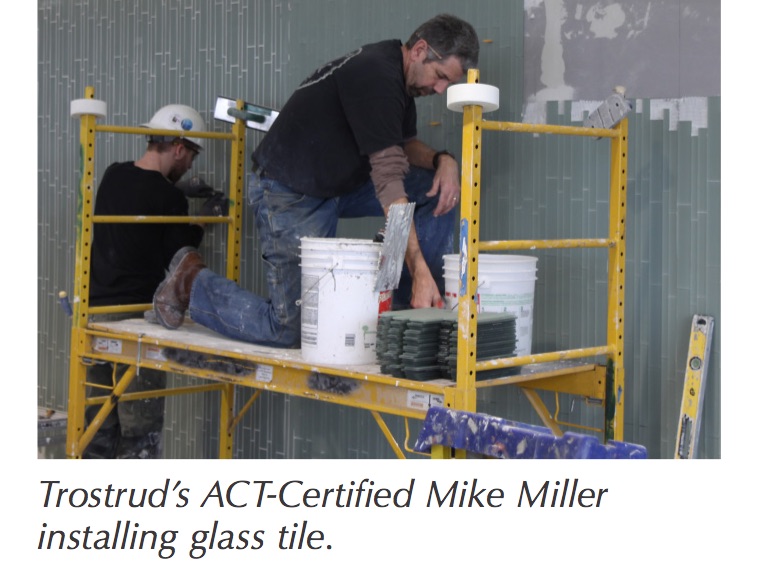 Trostrud was intent on setting a level-of expectation regarding the flow or puddling of water, at the barrier-free showers and the pool deck, insisting on a minimum 1/4” per foot pitch to drain to avoid pooling of water in the deck and locker rooms. The condo association balked, expecting the pool deck to drain just like a large shower floor. This conflict presented significant challenges, including a drainage drawing that was modified three times before getting agreement from all parties. 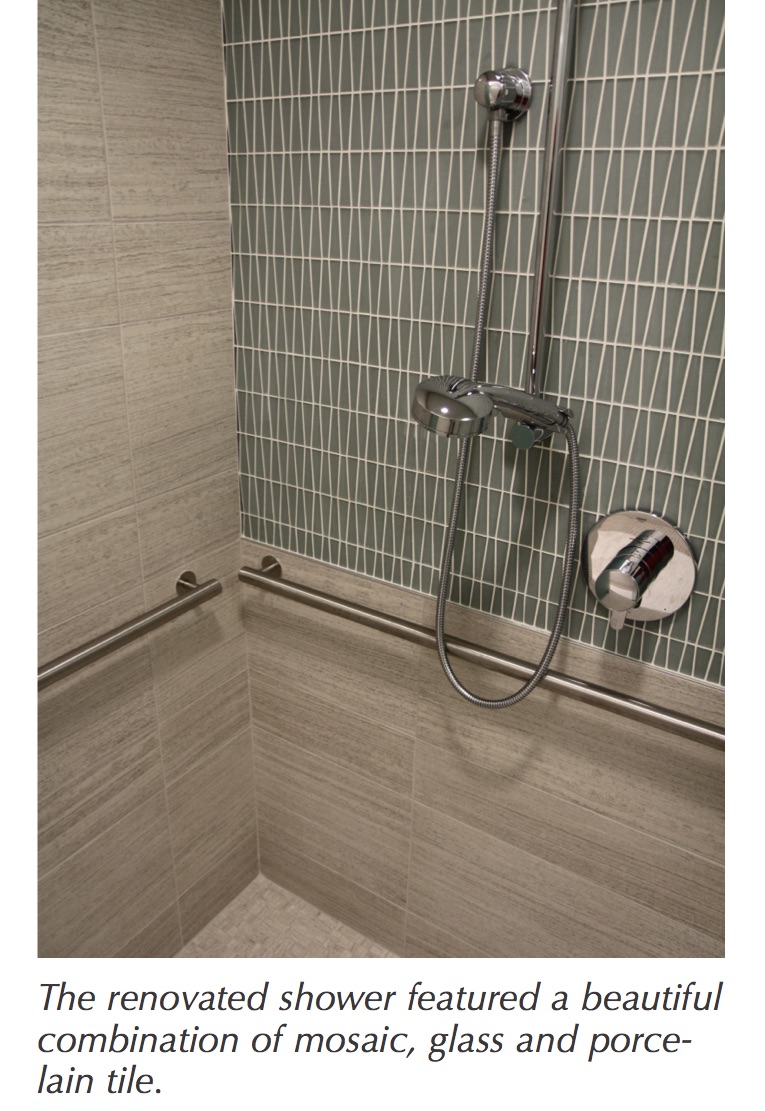 The existing pool was to receive a new stainless steel coping that would be set as high as possible to allow for the required pitch. At the perimeter of the pool deck Trostrud was required to meet existing aluminum flashing which could not be changed. The final drainage drawing consisted of several linear drains and many spot drains.

When the demo was complete and the tile mud beds were removed, it was clear that the existing concrete subfloor at the locker room required significant help. Leaking showers had caused rebar to rust and expand, fracturing areas in the sub floor. With the help of a structural engineer, the slab was rebuilt. All the adjustments resulted in a four-week delay in an already-aggressive schedule. 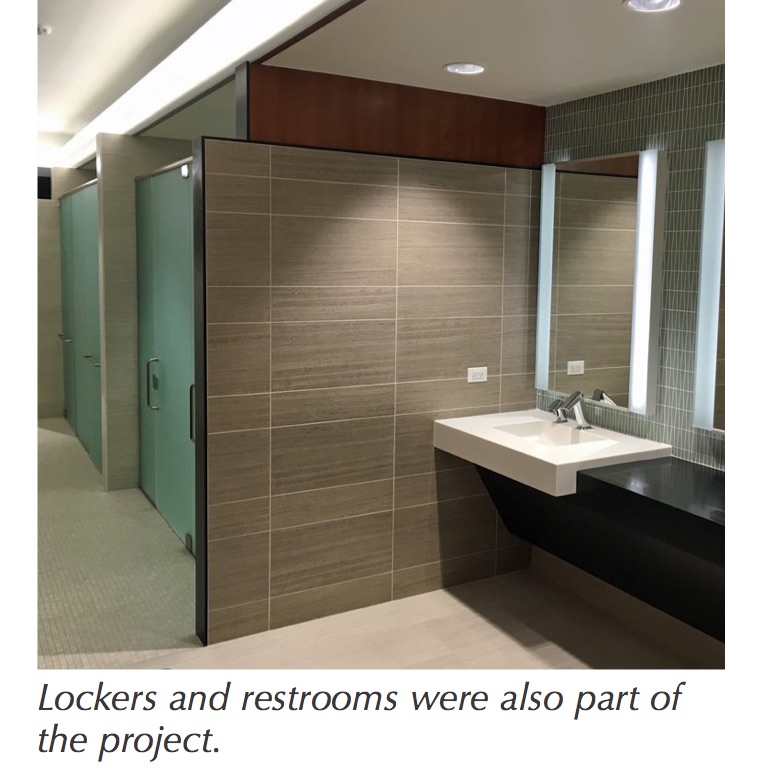 Once the floors in the locker rooms were resolved, the first phase went off without a hitch. The pool deck was another story. The pool contractor set his stainless steel coping 1/2” lower than agreed. Trostrud discovered the error when setting spot drains, in the beginning of the pool mud-bed installation. This greatly complicated the installation, and correcting the coping was not an option.

“We preceded the best we could,” said Brad Trostrud, vice president of Trostrud Mosaic & Tile Co., Inc. “Mike Miller, our foreman, worked his magic to make the deck drain effectively.” 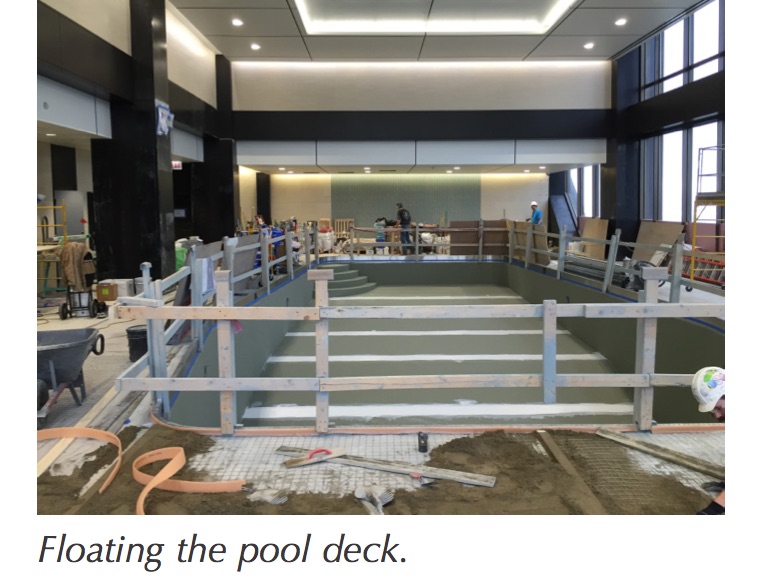 The new schedule also required Trostrud to mud set over a freshly poured, uncured concrete slab. Even though Trostrud was using a floating mud bed, they worked with Tyler Barton from MAPEI and the concrete contractor to devise a better solution. It was determined that Barrier One Porosity Inhibiting Admixture, added to the mix, would allow Trostrud to cover the slab in 10 days.

The Italian porcelain tile was Caesar Uniqua in Tiburtina, Argentum and Imperium, and well as a solid black tile by Caesar. Glass mosaic was from Island Stone. Products were sourced through Virginia Tile in Wood Dale, Ill., and set using MAPEI products, including Ultracolor Plus, Keracolor U, Ultraflex LFT, AquaDefense, Adesilex P-10 and Mapecem Quickpatch.

When the job was completed, the condo board and Archimage Architects were extremely satisfied with the results. 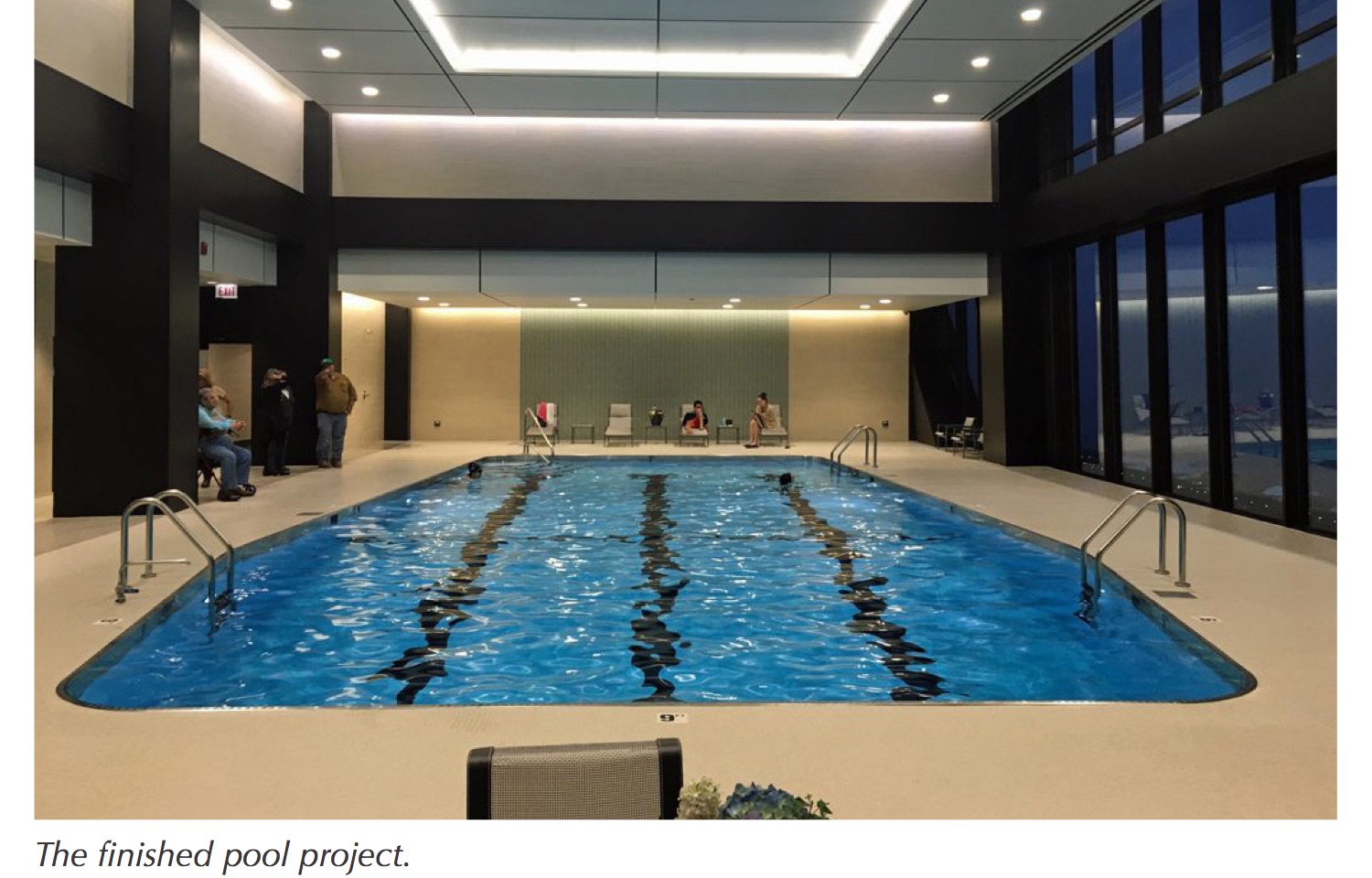